Make A Difference - Concert for a cause 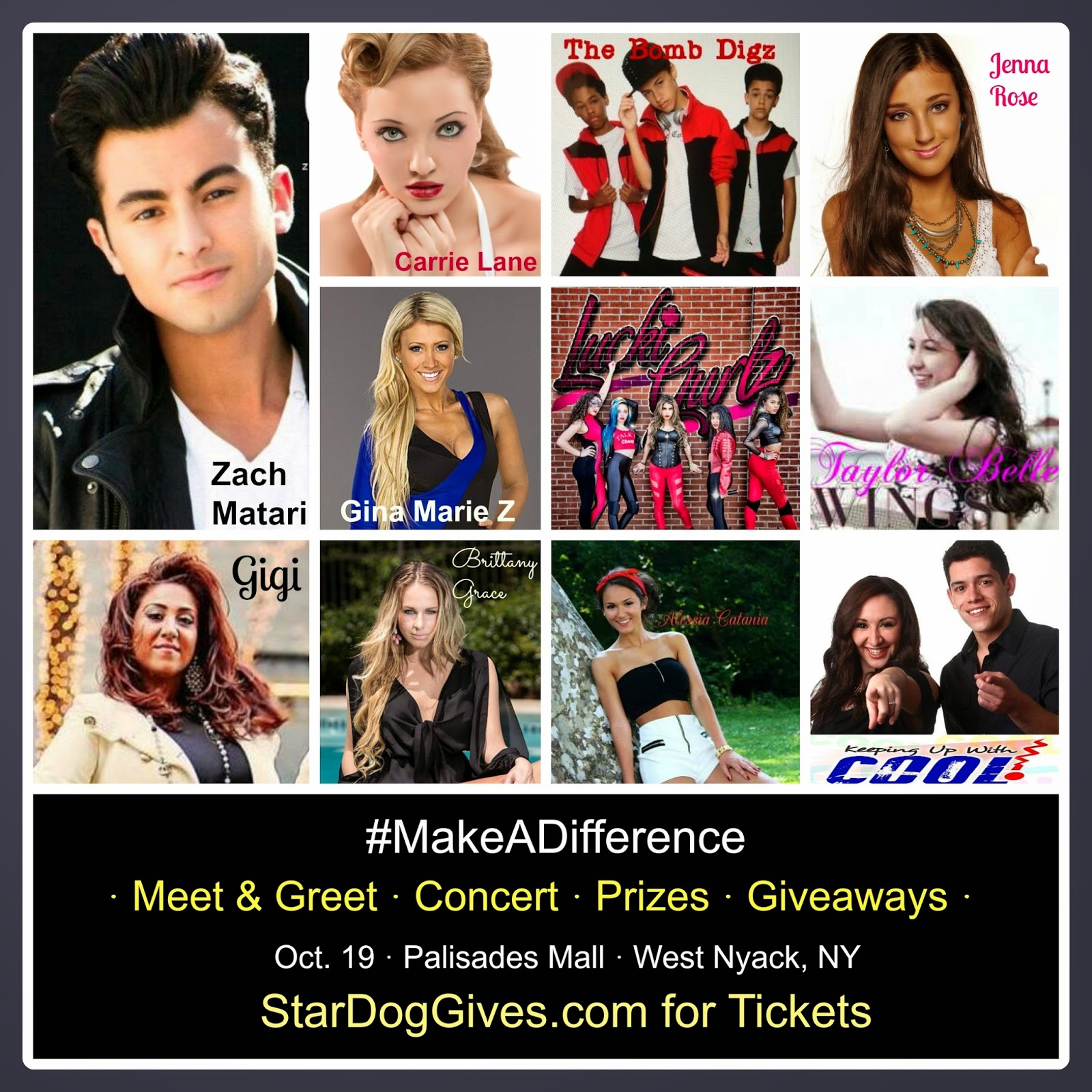 Star Dog Enterprises is working with teens and tweens to help provide clothing to homeless youth.  “Our goal is to let young people know they can do something to make a difference.  We are offering them a fun experience while giving back to their community.”

Star Dog together with Rockland Nightlife and Entertainment brought together 10 of Social Media’s hottest stars for a benefit concert at the Palisades Mall on Oct 19. After the concert the STARS will meet with all the fans to take pictures and sign autographs.

The lineup for this show consists of New Jersey’s own Zach Matari and Carrie Lane along with The Bomb Digz, Lucki Gurlz, Jenna Rose, Taylor Belle, Meaghan Dowling, Shawn Megira, Joe & Lenore Luca and GinaMarie Z from Big Brother 15.  Special Guest: model, Brittany Grace and Gigi from Jerseylicious. There will be giveaways and surprise guests.  This is a safe and controlled event for all ages.

Every ticket sold for this event will provide a child at Family Promise homeless shelter a brand new t-shirt.  Family Promise assists families who are temporarily homeless. They provide clean, safe overnight shelter, nutritious meals and clothing.  They also help the homeless to find housing, jobs, and resources to get back on their feet.

Tickets for this Meet and Greet Concert event are $30 and on sale at on the Star Dog website www.StarDogGives.com  or at http://levitylive.com/shows.cfm

﻿
ABOUT THE ARTISTS:
ZACH MATARI is a pop-R&B singer/songwriter/musician born and raised in New Jersey. He is currently touring with Jacob Whitesides and previously opened up for artists such as R5, Fifth Harmony, Midnight Red, Sabrina Carpenter, Paramore and Mario.  Zach is an advocate on Anti-Bullying and has been on the road with the Reality Dance Jam and Teen Nation Tour, a peer-to-peer community service program to educate and entertain youth about bullying in a way students can relate – through music.  Zach’s performances are high energy, crowd pleasing and are backed up by the Beat Club Dancers, a dance crew who promotes rising above diversity.  His current song "Up To You" can be heard on ITunes and YouTube.
THE BOMB DIGZ consist of Devin, Lucas and Kevin - 14 year old New York and New Jersey boys. From covers on Youtube, to hitting up the studio, to performing for large crowds, this trio is creating a firestorm on the music scene, Recently performing on the Arthur Ashe Kids Day stage, The Jones beach Theater, NJ State Fair, Hershey Park and GramercyTheater, they know how to "wow" the crowd. These boys have been featured in international modeling campaigns as well as Beyoncé’s original “Let’s Move” campaign for First Lady Michelle Obama.
LUCKI GURLZ are a Pop & R&B singing, and dancing female group of five individually talented, and diverse gurlz. Recently, the Lucki Gurlz performed with Snoop Dogg aka Snoop Lion on Live with Kelly & Michael, the David Letterman Show, an event with Mindless Behavior, Jacob Lattimore, R5 & Bella Thorne for the "Let's Move" 2013 anniversary in NYC.  Lucki Gurlz hope to inspire their young audience with their music, encourage young female empowerment, and be the voice for young girls who don’t feel pretty, are bullied, or simply feel that their voice is not heard. Lucki Gurlz YouTube video with Nick Tangorra has been viewed over 15, 000 times and their cover of Rhianna's "Diamonds" has received over 250k views.
JENNA ROSE has been on the music scene since she was 10 years old when she released her first Youtube video "MyJeans" which went viral with over 14 million views. Since then, 16 year old Jenna, has worked with Beyonce, Pink, Gwen Stefani, Jessica Simpson, Macy Gray, Christina Aguilera, Britney Spears and many more.  She is currently on The Reality Dance Jam Tour and has a new single "Forget You"
CARRIE LANE was born and raised in Montclair, NJ.  She has been performing on stage since she was 4 years old.  Her recent credits include judging Rockland's Got Talent and opening for DeLeasa and Mike Tompkins. Carrie loves singing and writing her own music that comes from her own relatable experiences.  Carrie’s new song "Nothing to Say" premiers in Sept.
TAYLOR BELLE is a 16 year old singer form Long Island, New York. She has performed at shows all over New York and Pennsylvania. Taylor sings a variety of music including pop, oldies and r&b. Her cover and original song "Wings" has had over 50, 000 views collectively on YouTube.
MEAGHAN DOWLING is a teen comedian with her own weekly YouTube comedy show TeenThingsTV.  Her comedy focuses on teen topics such and one sided friendships, dealing with bullying, building confidence, being a Disney princess and shopping dilemmas.
JOE AND LENORE LUCA  brother sister duo and host of Keeping up with Cool, a fast-paced, energetic, half-hour weekly series aimed at teens and young adults.  Joe and Lenore travel the US looking for all things that are cool then report their findings thru celebrity interviews, jokes, comedy sketches, and relevant news stories. Keeping up with Cool airs on FirstRun.Tv
THE SCENE KINGS are combined Duo Dennis Ciallela and John Feelgood.   They gained notoriety among music industry pros worldwide with remix style and signature sound that features a unique blend of commercial dance, progressive, electro, and tribal house.  You can find their music on retail outlets like Beatport, ITunes, Amazon and YouTube.
ALESSIA CATANIA is an aspiring model seen on the runway of designer Jazmin Brown and at NYC Fashion Week.  Alessia, also, serves as the face and spokesperson of StarDogGives.com.
SHAWN MEGIRA is currently on tour with Reality Dance Jam.  With over 80K  on Instagram he became the focus of the 2014 Documentary Instafame
GINAMARIE Z  Second place runner up from CBS Big Brother 15.  GinaMarie is well rounded in the entertainment world as a model, actress, dancer, and singer.  Currently she lives in New York and has released a new pop single, “Open Book” available on ITunes.
See a Concert - Help the Homeless
﻿
Posted by Unknown at 8:07 AM

Newer Post Older Post Home
Subscribe to: Post Comments (Atom)
Star Dog is more than just another T-shirt Company!
Every time you buy a Star Dog t-shirt, Star Dog Gives a t-shirt to a child in need.
We build confidence in young people by providing low income and homeless children with new t-shirts that make them feel good about themselves.
We are committed to inspiring and empowering children.
Every t-shirt we sell provides a child with a greater chance to succeed socially and academically.
Buy a shirt and wear it proudly! Together we can make a difference.